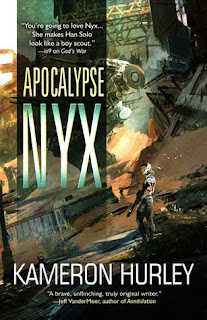 Apocalypse Nyx is a selection of short stories starring the titular Nyx. Once a member of the Bel Dames, a brutally effective group of government assassins. Nyx is now a bounty hunter – though she’s lost none of her skillset. Or her attitude, as she guides her team of bounty hunters through the vicissitudes of life on a world wracked by war and magic.

Lets talk about that world for a minute. It’s one defined, at both the personal and macro levels, by conflict. Nyx’s nation has been waging war with one of its neighbours for what feels like generations. In pursuit of victory, they’ve used guns. Bombs. Espionage. Tailored viruses. Genetically engineered bugs. As have the enemy. All this has led to large portions of the country being uninhabitable. It’s also led to almost the entirety of the male population doing mandatory military service in fantastically lethal war zones, with a very low life expectancy. Socially, this is a world run by women, because all of the men are either fighting, or dead.

Of course, the world is broken, which makes everything a bit more difficult. It’s a world of faith – one where the call to prayer goes out on schedule, and where mullah’s are in competition for the attentions of the faithful. But also one which encourages a loss of that faith, in tragedy, in pain, in loss.

Then there’s the insects, and the magicians. The insects – well, they’re all over the place. This is a world which has embraced bio-mechanical and genetic engineering. Where the world as a whole is a tapestry of the waste of human potential, the sheer inventiveness here – of killer wasps, of spy-bugs which are actually, er…bugs, of ichor which can be used to build an arm – lets in a little creativity, a little humanity. Of course, that creativity is being used to create wasps big enough to be used as a swarm of guard dogs, but that’s Nyx’s home for you. There are these little sparks of ingenuity, of hope, of purpose, wrapped within an occluding sense that they’ve all been misused; that things are broken or decaying, systems and artefacts both, but only due to the hubris or neglect of people.

It's a vividly drawn world, to be sure. In its hopes for and expectations of humanity, it carries a raw emotional punch. Watching Nyx drive past an abandoned homestead, shattered by bio-bombs, or see a family struggling to survive in a desolate, dangerous landscape, caring for a war veteran now catatonic from the experience – it’s a punch in the gut. It may make you feel pain, sadness, or a bubbling frustrated rage, but it will definitely make you feel something.

What Nyx seems to feel, mostly, is a kind of quiet self-loathing, mixed with frustrated anger and pride. One of the ways this presents, both to her colleagues and to the reader, is by not taking any crap from anyone. Nyx is damaged, sure, but I don’t read her as broken. She’s aware – perhaps far too aware -of her flaws, digging into them, making a nest in her own refusal to engage, in a world which encourages that disengagement by, well, being terrible. Much of what we might see as emotional growth is in the subtext – as she cares for her team, whilst also being prepared, or indeed encouraging herself to abandon them. They, or she, are liabilities, failures and monsters with whom emotional connection can only end in disaster. Nyx constructs a wall around an emotional core, maybe out of fear, maybe out of awareness of her own lethal nature, maybe because she thinks she’s poison, or maybe because emotional vulnerability is so often met with cruelty. In between the drinks (and there are a lot of drinks), Nyx is smart, mad, bad, and dangerous to know. But she’s a complex character as well, not only an arse-kicking heroine, awesome as that is, but a complex individual, masking their thought and their hurt under something else.

You may be here to watch Nyx shoot some fool in the face with a shotgun, before disarming his two mates, breaking their necks, wiring a building to explode and stealing a priceless artefact under covering sniper fire. And you will not be disappointed. But you may be here for the quieter, sadder Nyx, who sees a relationship with one of her team as dangerous, who isn’t able to reach out, who matches affection and connection with abuse and frustration. Both are equally real, equally true.

I won’t get into the details of the stories in this collection, to avoid spoilers. But there’s a lot of great stuff here. There’s tense heists, to be sure. Then there’s comedy of errors, as Nyx’s team of badasses runs their own sense of competence up against reality. There’s moments that hint toward a larger agenda, and a lot of great background. If you’ve ever wondered how Nyx’s team got together, how they stayed together, then there are stories here to answer your questions. If you wanted to see more of the world, the bug bombs, the endless, society-breaking war, the glimpses of high technology wrapped in an enigma – there’s some of that, too. If you want to see Nyx and the gang kicking arse and taking names, painting the walls with blood, then drowning the memories in alcohol – this is one for you.

It’s fast paced sci-fi action, absolutely. It’s got enough blood and guts to satiate and satisfy, yes. But it’s also a thoughtful collection, one which gets us further into the characters heads, one which isn’t afraid to get the reader thinking about the way pain and hurt can make us act, and isn’t afraid to explore larger issues.

If you’re new to Nyx, this may be a good place to start, taking place before the current series of which she’s the star. If you’re already a fan, this adds some wonderfully bloody, emotionally sharp texture to an already intriguing world and characters – get on it.