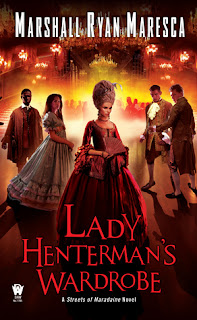 Lady Henterman’s Wardrobe is the second in Marshall Ryan Maresca’s “The Streets of Maradaine” sequence, the first of which I thoroughly enjoyed reading last year. There’s a larger Maradaine universe being explored in other sequences, including youthful and magical vigilantes, and Holmesian mage-detectives, but this sequence focuses on the Rynax brothers, who have a penchant for elaborate heists, a number of slightly strange friends with specialist skills, and a serious desire to find out who burnt down their neighbourhood, in order to express their disapproval.

The city of Maradaine has always seemed like another character in these books, putting different aspects of itself on display, depending on which characters were looking at it. Here, we see both the more run down, un-examined parts of the city, where law enforcement treads quietly, carefully, or in large numbers – and parts prone to the roaring revels of the wealthy, where private guards make sure that nobody who isn’t there to cause the correct kind of trouble is let through the door.

The first of these is epitomised in the lively neighbourhood where the Rynax brothers make their home. It has several excellent craftspeople, and a sense of community. There’s a history there, across generations, and a sense of people looking out for each other. If the law is far away, the local criminal element operates within rules, operates with respect, and knows where to push and put its boundaries. It’s a place where being an outsider could get you a knife in the kindeys, sure, and one where a moments inattention might lead to a broken head, but where reputation is everything, good and bad.

By contrast, the opulent manors of the rich are a baroque haven, full of enough glinting gild to satiate even the most demanding magpie. These are people happy to stand on the shoulders of others to get where they are – or, if necessary, hold the heads of others under water. Security’s tight, and the spaces are vast – if not overly populated by anyone with much sense of responsibility. That said, the owners are at the top of the socio-economic heap, and they’re certainly willing to keep it that way.

Which brings us to the characters. The Rynax boys are still as wonderfully drawn and complex as ever. One suffering the after effects of a covert operation gone wrong, the other happy to try and build a respectable life and a respectable family – but both determined to track down the cause of their woes. It’s great to see the edges here – there’s someone who might have been an action/anti-hero in another story, struggling with life after being shattered and rebuilt. Then there’s his brother, who is genuinely happy not being the hero of the week, and just wants to settle down, make interesting mechanisms, and have a quiet life with his family. They’re not stereotypical heroes, but they do act as very relatable people, shaped by their experiences, and living with the consequences of their choices.

They’re joined by a thoroughly enjoyable cast of other reprobates. I particularly enjoy the hard-edged markswoman with a penchant for precision and a small crush on the married Rynax, and the street girl who has started to take the children of the streets and make them her own, lending them her own strength when necessary, and pushing forward in an effort to be something more.

There’s a delightful bevy of dubious coves as well. The eponymous Lady Henterman is smooth and cold as ice, definitely someone worth watching. There’s the mysterious gang leader moving in o n the formerly safe territory occupied by the Rynax twins, with his programme of extortion and brutality. There’s Lord Henterman, a man almost frighteningly vague. And, of course, there’s the police – no fan of people they consider nuisances at best, and outright dangerous at worst. Whether some of these erstwhile antagonists are actually bad people is open to debate, which is a nice change – they may just be working their own agenda, without the necessity of malevolence. But there’s some wonderful diversity and personality on display here, and watching them face off against our protagonists was always delightful.

Plot-wise – well, I won’t say much, for fear of spoilers. The Rynax brothers are known for their heists, and this is definitely a story of a plan which needs split second precision, and the ability to react properly when…er..I mean if…it all goes wrong. There’s some wonderful moments where your expectations are subverted, and some wonderful duels, the kind where wit and blade matter as much as each other. There’s some reasl emotional heft in the dialogue between the Rynax gang, and a sense that they’re starting to look forward, and out of their current circumstances. There’s also the white knuckle, every-second-counts high-wire tension, of course, and some revelations that will hit hard, down in the gut. It’s a heist story, an adventure story. A story about family, about friendship, about betrayal, murder, and making a heap of money.

It’s fast paced, it’s smart, it made me laugh aloud more than once, and it also kicked me right in the feels more than once. This is kick-arse fantasy, and if you’ve been waiting to find out what the Rynax brothers did next, or you’ve always wondered how a fantasy heist would go down, this one’s worth checking out.