A Time Of Dread: Blog Tour, Extract and Review! 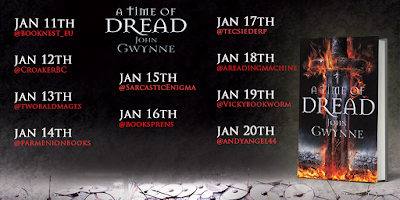 We've been talking about John Gwynne positively for a while now; Wrath, the last book in his The Faithful and the Fallen series had all the blood, battles and emotional conclusions one could hope for, and hearing of the start of a new series, a successor set in the same world but centuries later, left us waiting with great anticipation.

As a result, we're very excited to be part of John Gwynne's "A Time Of Dread" blog tour, along with some other brilliant bloggers. You'll see their twitter handles on the left. If you want to learn more about this new series (which we can assure you is epic stuff), then we'd suggest casting an eye over their twitter feeds on the dates mentioned.

Anyway, being part of the blog tour, we've got something special for you - an extract from A Time of Dread. Well, actually, it's the entire first chapter, which follows Bleda, young prince of one of the horse tribes, as he encounters the Ben-Elim, semi-divine messengers and now iron rulers of much of the world, for the first time.

If that whets your appetite, we've also republished our review beneath the extract, so that you can decide whether you liked it as much as we did.

Now dip your toes into the world of A Time of Dread...

We'll admit, that first chapter packs a serious punch. Hopefully you enjoyed it as much as we did! If the extract captured your attention, you'll find a review for the full story below, and you can follow along on the rest of the blog tour too!


A Time of Dread - Full Review 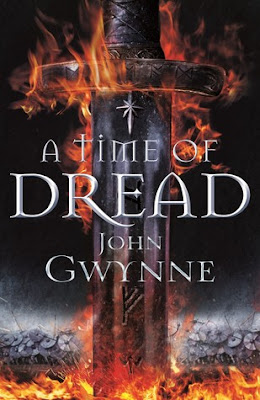 A Time of Dread is the first in a new series of fantasy by John Gwynne, whose ‘Wrath’ I reviewed earlier in the year. Gwynne has a reputation for producing high quality epic fantasy, with some compelling characterisation and…rather a lot of blood. I can safely say that in A Time of Dread, that reputation is burnished further.
The book is a follow-up of sorts to his earlier series, taking place a century after the climatic battles and social changes of ‘Wrath’. Though a century feels like a long time, the longevity of some of the world’s inhabitants – giants, semi-divine seraphim and their nemeses - suggests the possibility of the return of a few familiar faces. But having read the previous series isn’t necessary; though there were a few times when it added extra depth to some interactions, the shift in time means that this is designed to work as a stand-alone series from the get-go, and at that, I suspect it succeeds.
The land is, at least nominally, at peace. A large swathe of it is ruled by the winged Ben-Elim, apparently servants of an absent god, who followed their enemies back into the world to hunt them down. The Ben-Elim have a cultural advantage as rulers – their legend has been put out before them, and the malign nature of their enemy isn’t really in question. They flatly state that they were the servants of a god, and propound and propagate his lore. They’re also, broadly speaking, fair – they’re encouraging people to live safe, peaceful lives, which helps prevent the abuses of nobility against the common man. Mostly though, they’re doing this for their own reasons – a peaceful dominion allows them access to people and resources, to continue prosecuting their ongoing war against their less friendly kin. The Ben-Elim are goal oriented, and that has its own problems. They’re prone to rigidity, and to being prepared to sacrifice anything and anyone (else) if they feel it will help them achieve their aim. After all, defeating the more unpleasant flying monstrosities will lead to a safer humanity – so in the meantime, a bit of impressment or the occasional massacre is for the greater good.
That makes them a great, conflicted set of characters to root for. They’re definitely fighting against an absolute, horrifying evil. But their efforts to end that fight are horrifying I their own way. The humans they’ve brought in around them are similarly conflicted. Some question the rigidity of Ben-Elim rule, and others, drawn from cultures being drawn under the benevolent boot of Ben-Elim rule, wonder why they let these monsters be in charge in the first place It’s a complex situation, and one which Gwynne portrays with sympathy and an unflinching eye for the consequences of “the greater good”.
There’s also a politically separate group of humanity, out on their own and causing trouble. They feel like the Big Damn Heroes of the operation, without oversight from the Ben-Elim, living free and disrupting the bad guys that they and the Ben-Elim have in common. They suffer from a lack of resource and direction, seemingly, but they make a strong contrast in the forces of ‘good’. I’d like to see their fissures as much as those of their putative allies, but hopefully we’ll see that they’re not a united front either.
The bad guys are…well, they’re bad. The antithesis to the Ben-Elim, they’re full-on cultist-acquiring, scheming, plotting, indiscriminate slaughter bad guys. If the Ben-Elim are the perils of good intentions and an overly-taught system, their opponents are evidence of why that system exists, and they’re not nice people at all. If I have a complaint, it’s here – the bad guys are bad. Sure, the good guy have different strands of discussion over which brand of goodness they’re going to follow, in the authoritarian/libertarian mode, but their enemies represent a unifying threat – they’re so genuinely appalling, I haven’t worked out yet how they get their cultists to sign up. It’d be nice to see the same level of complexity that we see amongst the Ben-Elim in their direct opposition.
Character-wise, there’s some interesting people in play. I’d have liked to see more of their internal monologue. Some may be familiar from the earlier series, but some – like the Drem, a trapper youth in the far wilds of the empty area known as the Desolation – are entirely new. Gwynne has a firm grasp of characterisation – Drem, for example, has mannerisms and an internal monologue which make him feel awkward and a bit confused by social nicety, whilst also explaining to the reader how his viewpoint is constructed, and letting us sympathise with it. Others, like Riv, a trainee under the Ben-Elim, give us an insight into their culture, and a degree of empathy to that culture by way of what they’re going through. Riv is smart, funny, articulate – and given to the occasional blind rage. It’s to Gwynne’s credit that he can craft characters like this sympathetically, and make the reader feel alongside them, and understand the travails which they go through.

There’s some nifty character work here, especially as it opens up for longer term arcs in follow up books; I’m looking forward to seeing both how our protagonists from this volume interact with each other, and with any new characters in the next book. In the meantime, they’re convincing as people, with the sort of small troubles familiar to anyone, and the sort of larger causes and ideals which make them feel more heroic. Once again though, it’d be lovely to see something from the eyes of our putative villains – the book doesn’t suffer from the lack, mind you, but I’d love to get an understanding of their ideology.
The plot…well, it’s solid. There’s a slow ramp up as we’re introduced to the world and to the stakes. By the end, there’s sword fights, dread cultists, raids, blood everywhere, a little bit of magic – and, on a broader level, the suggestion that the world is about to change, not necessarily for the better. There’s some great emotional payoffs, not just at the close, but spaced through the text. They, along with the kinetic and vivid combats, and the closely observed characters, kept me turning pages long after I should have stopped for, you know, food.
In the end, this is a precursor to other volumes – and I imagine that the time of dread will open into something more sprawling and ominous. It’s a great start though, giving us high stakes action, believable characters, and a world which carries some of the complexities and shades of grey of our own, whilst still feeling fresh and imaginative.
If you’re coming to this series off the back of Gwynne’s last one, I’d say this will fit your expectations – smart and well-crafted epic fantasy. If you’re coming in without the benefit of that series, don’t panic. It still works on its own, and is still a great read. In either case, it’s a rewarding read.