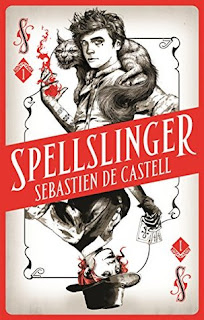 Spellslinger is the first in a new fantasy series from Sebastien De Castell, whose ongoing ‘Greatcoats’ series I’ve thoroughly enjoyed in the past.

The world of Spellslinger is something a bit different from DeCastell’s last work. In some ways, it has a high fantasy influence. There’s a society ruled by mages, those with the power to shape reality to their whim. Within that society, situated around an oasis, are others – the disenfranchised, those with no magic, the servants to those more than happy to set them on fire on a whim. This is a culture which feels both calcified and paranoid. There’s a central set of families, cloaked in magic, happy to eliminate outsiders to protect their privilege, and then stick the knife into the leaders next to them. The reader is embedded in this niche, following one of the sons of power, seeing privilege at work. That magic has the potential to bestow exceedingly long lifespans is another side-note, another ossification of existing power structures.

There are suggestions of other cultures outside of this one of course, beyond the reach of magic and paranoid insularity. There are some outspoken characters, swaggerers with their metaphorical (and sometimes literal) hat pulled over their eyes, unwilling to take any crap from wizards and their odd social expectations. If the oasis of magery can be likened to Victorian Britain – with all the inbreeding and plutocracy which that implies – its neighbours are something more of the wild west. There’s an energy there, in the small titbits we receive, an enthusiasm for grasping opportunities which the mage-lords seem to feel is beneath them. Still, the overarching society in the narrative, the one on which we focus our attention, is that of the mages – which is socially stratified, petrified and prone to responding to the potential for change with extreme thaumaturgical violence.

The protagonist is the teenage son of one of the pre-eminent mage clans, as yet unable to use his magic, and rather concerned about it. Those from the nobility who are not magic users are sent out into the servant class – no longer family, they may be trusted to serve an un-poisoned breakfast. Kellen is wry, with a burgeoning cynicism typical for his mid-teen age, and at least initially seems unconscious of the gilded had which fate has dealt him. He’s certainly clever, given to thinking (or perhaps overthinking) through his actions and their consequences. At the same time, he can be driven to impulsive moves under emotional strain. It’s interesting to watch Kellen’s journey over the course of the text – less one of maturity, and more realising the reality of the world in which he is embedded.

He already has a sense for injustice, and a somewhat bewildered unwillingness to accept it in himself, his associates, or their society. Still, there’s room for argument here – how Kellen will conduct himself when the pressure is on, and what he actually believes in – well, that becomes clearer over the narrative. Watching him inch toward the person he has the potential to be – for good or ill – is delightful, and convincingly constructed.

In this he’s aided by the fantastically named Feruis Parfax, a woman from one of those far off lands. She’s a little mysterious, obviously clever, and has a tendency not to take any crap from self-entitled magelords. With a waistcoat, a hand of cards, and a penchant for drawling insults, Parfax puts me in mind of a cockier member of the Magnificent Seven. She has an energy and confidence that some of her antagonists’ lack – and also a kind of sorrowful, knowledgeable compassion, which contrasts with what the oasis society paints as necessary cruelties. Parfax is a lot of fun to watch – a sharp-eyed, sharp tongued drifter, with an intolerance for injustice, and willingness to do something about it. That she relies on wits and technology helps keep her approach fresh and interesting. That she’s often laugh-out-loud funny is a happy side-benefit.

The duo are thrown together initially, and watching the banter and cultural confusion as they acclimatise to each other – well, it’s entertaining, and often thought provoking. They do seem unable to keep out of trouble in one fashion or other, and that certainly kept me turning pages.


From a plot standpoint…well, as ever, I’ll try and avoid spoilers. It’s part coming of age story, and part magic-western. There’s some fantastic confrontations against the odds, and possibly the tensest, funniest magical duel I’ve ever read. There’s investigation of a burgeoning conspiracy, with red herrings and blind turns scattered about – at the same time as Kellen slowly comes to terms with who he wants to be, and quite what the society he is immersed in has become. . In short, it’s a compelling story, charmingly and grippingly told. It’ll make you chuckle, make you think, and quite possibly make you cry – and for that, I’d say it’s highly recommended.
Posted by Chris at 12:00 AM