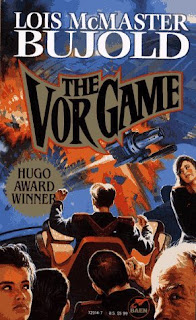 I’m working my way through Lois McMaster Bujold’s ‘Vorkosigan’ saga at the moment, not for the first time. Next on the list was The Vor Game, an adventure story mixed up with some sci-fi politics, and cleverly crafted interpersonal drama.

The first part of the novel takes place in an isolated training camp on Barrayar. Young Miles Vorkosigan is now coming to the end of his time at the military academy he tried so hard to join in the previous book. He’s done well, of course, as we might expect from a man who is also a pocket dynamo. But alongside his ingenuity, passion and willingness to do what needs to be done, Miles has something of a distrust for authority which isn’t his own – he’s not especially obedient, and takes a rather flexible ends-justify-the-means approach to orders.

In order to try and inculcate a little more discipline into their newest officer, the powers that be decide to send Miles to Kyril Island, or “Camp Permafrost”. Part of the year it’s used to train new recruits in the infantry, in arctic conditions. The rest of the year, still an icy hellscape, it’s populated by a thin herd of technicians, wastrels, political embarrassments, and, now, Miles Vorkosigan.

Camp Permafrost is grimly horrifying to read about. It sits on the far end of nowhere, an isolated space surrounded by a hostile environment. There’s a sense of claustrophobia, and an atmosphere with the febrile air of cabin fever about it. This is where careers go to die, men left writing reports no-one will read whilst outside a storm batters at the walls. Bujold evokes a sense of tension, and of hopelessness rather well – and gives us a Miles determined to endure.

The larger part of the book, though, turns around the Hegen Hub. This nexus of jump points is a natural meeting place of empires. We don’t see much of the surrounding areas, but the infrastructure of the hub, and the stations at wormhole entry and exit points, provides a sense of grandiose emptiness which stands in contrast to the claustrophobia of Kyril Island.  There’s a fair bit of time spent on ships as well, from fast couriers up through dreadnaughts – and the militaristic shine on display here and there helps keep these close environments feeling real.

In this, they are ably assisted by the characters, which has always been an area in which Bujold shines. Mile’s sense of energy, a need to run at things which don’t go his way until they’re resolved, leaks out of the page and into the reader rather quickly. Miles is on fine form here – fast talking, witty, and if occasionally out of his depth, also prone to a degree of emotional introspection which whirls him away from caricature. His need to prove himself, which came up in the previous novel, is re-emphasised here and gets him into more than one serious scrape. His anti-authoritarian streak is on display as well, along with an unfortunate need to one-up his opposition. Miles is ferociously clever, terribly driven, and very tenacious – but also prone to overestimating himself, underestimating his adversaries, or letting the situation escalate (or, in some cases, encouraging it to do so).
Miles is joined by a broad supporting cast for this outing; the most obvious of whom is Gregor, sometime boyhood friend, and now the Emperor of Barryar. Gregor is lugubrious, cautious, and shockingly incisive – a young man determined to shape something for himself alongside his role as Emperor, and also very aware of the weight and worth of his chains of duty. Gregor works as a great foil to Miles – perhaps more perceptive, less impulsive, and a social equal with an authority that even Vorkosigan isn’t willing to ignore.

On the other side there’s a range of antagonists – from Mile’s superior at Kyril Island, who doesn’t believe that the little Vor lord is showing the proper respect, to the leader of another mercenary fleet – a woman with a mind for schemes and mental flexibility that make her a rival for Miles. The latter is intriguingly, competently poisonous – a mirror of Miles, if he lacked his defining sense of duty.

The plot – well, it begins with the tale of Miles getting off of Kyril Island. This part is a bit of a slow burn, but it’s well drawn stuff – there’s some brilliant moments of situational comedy, pitched alongside high stakes, high tension standoffs. Things escalate quickly once in the Hub, with a series of crosses, double crosses, and triple crosses leaving the question of who is on which side rather…vague, for a while. There’s some cracking space action scenes as well, in between some genuinely brilliant dialogue. Battles, politics and personal development – this is a book which manages to keep everything in balance, and makes a great page-turner overall.
Posted by Chris at 6:42 AM