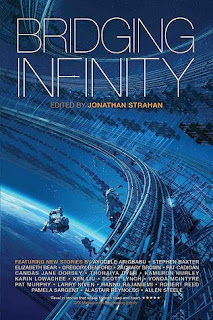 Bridging Infinity is a collection of short sci-fi stories edited by Jonathan Strahan (whose rather good collections I’ve reviewed before). It’s part of a wider sequence of collections,  each with their own theme and scope.  The theme of this collection, though, is, as the name suggests, mega-engineering projects. The scope, to try and generate a sense of awe in the reader, is a subtle, clever, broad-ranging one. That it often succeeds doesn’t hurt either.

Environments are, as one might expect, a large part of the stories in this collection. There are marvels on display here that stretch the imagination to envisage, but are certainly awesome. They range from the battleship crafted using the entire output of an interstellar level civilisation, pushing its people and economy to the brink of collapse, to a form of Dyson ring, spread out across the solar system to provide power  and resources to the inhabitants. There’s time for smaller dramas as well, of course.

The slowly crumbling world of “Rager in Space” shows us a humanity devoid of technological assistance in a post-Singularity universe, where toasters are emancipated, and the only functional AI is struggling to understand what people are, and what they’re for. There’s a gentle melancholy there, mixed in between the partying and the teenage slang, a carefully constructed sense of decline, and inevitability, at odds with the peppier overall message.

Then there’s the canals of drowned New York from “Monuments”.  Here, the plan to cool the world is posited by AI systems now acting in a seeming partnership with humanity. The broken columns and skyscrapers of cities after catastrophic temperature and sea level rises serve as a physical monument to humanity – but also to the hubris of attempting to control a global system. Here, the sun shade project is one whose implementation spans the generations. Here there’s a sense of isolation, of declining hope and a feeling of humanity sleepwalking into inevitable extinction. It’s not necessarily a positive story, in many ways, but it is a very human one.

For example, Ken Liu’s “Seven Birthdays” gives us a more intimate view, of the relationship between a child and her emotionally distant mother over the course of years; whilst the latter has been driven to work on large eco-repair projects, it is the former whose efforts to move humanity forward are truly breathtaking in scope, as she works to create a kind of immortality. Her motivations, though, are entirely tied up in character: her pain at the emotional separation from her mother, the desire to break the hold of mortality in the face of that estrangement of affection, to create more time – these are gently, subtly played, and marvellously done, even as the civilisation-shanging scope of her work becomes clear to the reader.

There’s a few stories where character seems to take a backseat to science;  “Mice Among Elephants” had characters which held their place reasonably enough, but where the grandiose idea of orbiting micro-black holes, used as a gravity wave emitter, were very much the centrepiece. That said, there were some charming moments with lifeforms made of plasma, which injected, oddly, a little more humanity into the prose.

Overall, this collection achieves its goal – to astonish and awe with the idea of what is possible on a grand scale in science fiction. It evokes the memories of Heinlein and Asimov in doing so, but then blends those with a more modern context – not only do we have high concept work, showing off some wonderfully imaginative ideas – but there’s a space in there for humanity, as well, a feeling of intimacy, a sense that these grand projects are dependent on and shaped by the relationships of the people and machines orchestrating them.  This blend worked really, really well for me – I’d struggle to find a story through the collection that I didn’t enjoy, to one degree or another. If you’re in the mood for some stories which will challenge and entertain you, whilst throwing open the breadth of the universe to the interrogation of your imagination, then I’d say give this collection firm consideration.