"Not So Much" Said The Cat - Michael Swanick 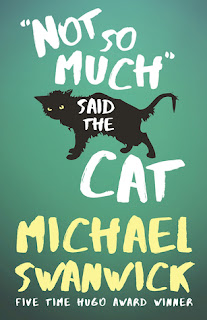 Not So Much, Said The Cat is a collection of short stories from Michael Swanick. There’s an eclectic selection available here, from time travellers on a ticking clock, to literary characters debating the nature of their existence, into discussions of the nature of culture and resistance in a cheerfuly conquered humanity.

The breadth of selection is rather startling, but it’s great to see this many clever worlds out on display. One story takes the reader on a Dante-esque tour of hell, showing off a slow-burning malevolence which is achingly hard to read. Then there’s a tour of the Irish countryside under nominally benevolent alien occupation. It has the greenery, the casual friendliness of the Irish – and a darkness beneath, blood mixed with the heavy loam of the soil. Then there’s the high-tech fairytale-scape of
The Dala Horse, a land which has been made mythical, which lives inside the tropes of myth through the protagonist – but carries the signs and scars of once being something outside of a story. There’s a wonderfully baroque and horrifying future New Orleans, as part of a Darger and Surplus story – a torrid metropolis, filled with men turned to mindless drones by a drug as punishment, set to serving masters in the gaily coloured, thriving Quarters.

Swanick builds his worlds with equal care, from the twisted dreamscapes and enervated passion of “The House of Dreams”, to the barren grime and ferocious personal energy of “Libertarian Russia”. Each is distinct, vivid, different – but all seem plausible and believable – even in circumstances where we’d rather not believe these worlds could exist.

The characters are similarly well realised. The constraints of shorter fiction mean more dependence on the reader to fill in blanks – but here it never really feels like there are any. The alternate pushin presented in one story is seen constrained, quietly present, struggling with an affection for a language. There’s the confused, struggling relationship of a man and a centipede-esque alien in “From Babel’s Fall’n Glory We Fled” – this in itself a fascinating study in differing cultural viewpoints,  The memoir of love, grief and loss that is “An Empty House with Many Doors”. Each give us people to follow, and in the space available, make them individuals, with thoughts, needs and feelings (oh, so many feelings).

Swanick is on top of his game here, giving us characters which feel , who need, who hurt. Some are more archetypal than others, but each was a delight to read.

The plots are, largely, excellent stuff. There’s what feels like pure fantasy, in some cases merged back into hard sci-fi. Some of the stories are more science-fiction, as well – it’s a broad mix, something for everyone. What doesn’t change is the sense of urgency, of compulsion, turning each page at two in the morning to see what happens next. Swanick’s prose flows. It’s intriguing, remorseless, delicate, wonderful stuff – each sentence carefully structured to drive the story, each narrative laid out to claim the attention of the reader. This is a book you can more than happily read in elegant, bite-sized chunks – if you’re willing to put it down at all.


Is it worth reading? I’d say so. There’s some great material here. The sheer breadth suggedts parts will misfire for some readers, but there’s enough here that everyone will find something to enjoy. The ideas are innovative and intriguing, elucidated by characters you’ll care about, however briefly, in well-crafted worlds. So yes, give it a read.
Posted by Chris at 7:18 AM