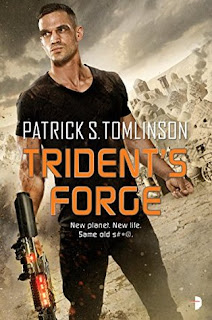 Trident’s Forge is the second in Patrick S. Tomlinson’s  “Children of a Dead Earth” series. The first, The Ark, was a rather clever murder mystery, with some decent characterisation and a top-notch setting, so the sequel had a fair amount to live up to. Despite, or perhaps due to, being distinct from its predecessor in many ways, Trident’s Forge does rather well.

Where The Ark was set in the tight confines of a generation ship, this sequel takes place on the planet to which that ship was heading.  The author manages to capture the sense of fear and wonder felt by the new colonists as they break ground. There’s new plants, new animals, and the feeling of a collective leap into the unknown is pervasive through those parts of the text. This is a new world, and it has the potential to be welcoming – or deadly. The highlight though, are the other inhabitants. Loose limbed, with shifting-coloured skin and headcrests, they certainly seem rather strange. There’s a degree of familiarity which grows up over the course of the text, but enough reminders of cultural distinctions are left in place to remind the reader that these are, well, aliens. They’re a well realised, unfamiliar brood, with some interesting social characteristics, which are explored sufficiently to emphasise the exotic – it would have been nice to get into the alien society a little more, but what’s there is well done in any event. It’s a cleverly crafted, plausible but alien society on a mostly familiar world with strangeness floating at the edges – all good stuff.

Most of the characters are familiar from the first book in the series. Benson, the detective-and-sports-icon returns, as does his one-time  subordinate, now wife, and a host of other familiar faces. Benson spends a fair amount of time being a combination of sarcastic, clumsy and heroic. That works rather well, and is quite an entertaining read; it also masks a few quieter changes in his character. This is an ever-so-slightly more cautious Benson, with perhaps a little more humility. There’s a sense of a man shaped by the events of the last book, one who has had to grab on to a certain amount of maturity in order to continue to function. It’s subtle stuff, in between the laughter, the quick thinking and the gunfights, but it’s good to see.

Equally as intriguing is Kexx, the indigenous equivalent to, well, Benson. An analytical thinker, with a good ear for languages and a long streak of tenacity, they’re an excellent window into the indigenous social customs, expectations, and the surrounding geography. There’s also the wonderful opportunity to look at humanity from the outside, and it’s taken advantage of fully. Watching Kexx, and the rest of the indigenes, deal with the arrival of humanity is fascinating. There’s those who would worship them, those that will go along to get along, and those working with different levels of suspicion and prejudice. This parallels, of course, the reactions of humanity to the aliens themselves.  Watching the shift in attitudes between the factions on both sides over the course of the book allows for an undercurrent in the narrative about the broader issues of colonisation, invasion, cultural hegemony, and so on; it’s not trying to hit you over the head, but it gives an additional layer to an otherwise entertaining and thought-provoking conflict of societies.

The plot – well, I won’t spoil it. It kicks off with something of a bang, and slowly ratchets the tension up over the course of the book. There’s some explosive action scenes, which are excellently paced and well drawn – my heart was in my mouth more than once. There’s a fair amount of witty banter and character pieces to break things up, and add some context to the explosions. There’s quite a lot of investigative work going on here as well – it’s not the same locked room feel as The Ark, but there’s a sense of adventure and exploration in the air, alongside the scent of murder.

Anyway – is it worth reading? If you read the first in the series, I’d say yes. Benson is an entertaining protagonist, and he’s surrounded by an interesting world, with an intriguing investigation, the occasional gunfight, and a supporting cast who have enough depth to feel human. If you’ve not tried The Ark, I’d start there first – but come back to this one, it’ll reward your effort.
Posted by Chris at 12:00 AM